I've been trying to piece together the last week and a half of our lives. Minute by minute, day by day. How we went from 73 days of waiting to another child's heart beating in Finn's chest. The call. The elation and the tribulations. You see it on the movies or have it pictured in your head. I thought I knew exactly how it would go and how I would feel, but I was wrong. 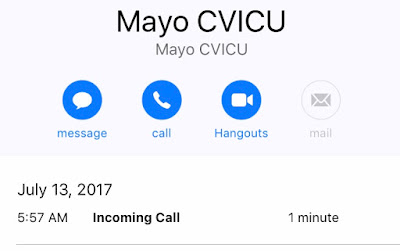 At 5:57 am on Thursday, July 13th I woke to a familiar number calling me. My throat was in my stomach as I answered. "Ali, it's Jill - Finn is fine!" (They know me well enough to start with that, or else I am in full blown panic mode before they are able to explain the situation). "Then what's going on?"  I abruptly asked.  To which she replied "Finn is getting a very special half birthday present today!" I gasped. I questioned her, I didn't know what it meant. Don't get too excited and jump to any conclusions I told myself. "A heart?" I asked... "Yes, Finn is getting his new heart today."


Jill instructed me to breathe and sit down for a minute. I followed her direction and plopped down in the middle of the RMH room. My head was spinning and I couldn't focus on the words she was saying. 10:30. Jeff. Breathe. When I hung up the phone I paced around not knowing what to do. I called Jeff, no answer. Again, no answer. I brushed my teeth got ready and called again. Finally he picked up. I had clearly woken him. We formulated a plan for Asher and the next few days as I was running out of the room. I jogged to the hospital. This wasn't at all how I expected to feel, should I be crying? 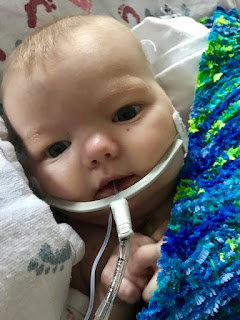 Anxiety crept in as I entered Finn's room. It was calm, too calm. Did I dream that I got the call? Was this a joke? Then like a swarm the nurses approached with congratulations and hugs. There they were, the tears that I had been missing. This was it, he was getting his heart. He looked at me sweetly as if he wondered why I was crying. It was what we had been waiting for. After 73 days, Finn was getting his new heart.


Blood work, planning, discussions, hugs and tears filled up the remainder of the early morning. Finn was headed down to the OR to be prepped for his surgery and the heart was set to arrive around 3:30 PM. Dr. Johnson shared with me that the heart was about as perfect as it gets for our boy. The right size, blood type compatible and located extremely close. Assuming that everything is "as advertised" we would have Finn back in his room by this evening. Finn 2.0 that is. 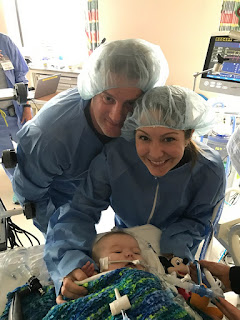 Jeff and I suited up in our bunny suits and prepared to walk Finn down to the OR. The anesthetist, Sue, brought Finn down twice before. She had previously said "the next time I see him I want it to be for the big one" and she was right. Third time was the charm. It was a relief to know she would be taking care of him. Finn was awake as we traveled to the basement of the hospital and wheeled him into OR room 608. It was something out of a movie. I was anxious, excited, scared and sad. This is what we had been waiting for but of course the risks were high.

For hours our nurse, Mandy, hit refresh on his OR report. We could see him go on bypass and that the new heart was in the OR. The play-by-plays were exciting and nerve wracking. How was the longest day of our lives also going by so quickly? It felt like a whirlwind and all of a sudden he was back in our sights. NO ECMO! There was a chance that the heart and his body would need some rest and that he would return on ECMO but our warrior and his new heart were doing great. A sigh of relief. However, the comfort wouldn't last long.

Knowing that the first few days post transplant are touch and go I chose to stay in his room on a roll out cot. When Finn was safely tucked into bed I was able to sleep. I woke up at 5 AM to a few beeps from monitors. I looked over at Finn. He was kicking and our nurse was trying to keep him from moving too much. I got up to help and try to calm him down. He wasn't having it. I looked at the monitor and I saw his heart rate drop dangerously low. The NP came running and was closely followed by Dr. Schears. He called for CPR. For 14 minutes and 11 seconds I watched my child be resuscitated. I screamed for them to save his life. There are two babies in there, Finn and his donor. I couldn't breathe. I've never been so scared of anything in my life. There is nothing worse than watching your child die and be brought back to life. Nothing. The vision of his face while he was getting chest compressions will never leave my memory. There was rumblings of ECMO and getting an OR room ready. Then the dressing was taken off his chest and all of a sudden his heart started to beat on it's own again. The team hurried to get him down to the OR where they wanted to monitor and be ready for ECMO support.

Hours felt like days and I was called down to the OR consultation room to meet with Finn's surgeons. No ECMO. His heart was fine. There was mechanical issue suspected and he should recover. We'd need to keep an eye on his other organs as CPR clearly affects profusion, but for the most part his heart was doing what it should. They took time to explain the theories on why the rate dropped but nothing was conclusive. We'd need to follow up with head ultrasounds and be vigilant about his kidney function but he should be fine. 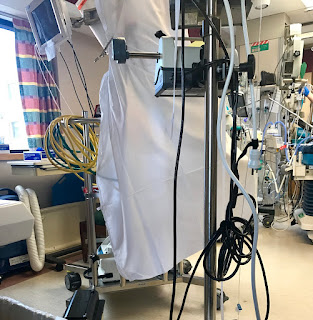 The result was that we wanted to keep his chest open for a few more days to be sure. They also left an ECMO circuit in the corner of the room "to ward off evil spirits" they said. The profusionist covered it with a sheet, as if I wouldn't see it. Elephant in the room is an understatement. I felt as if that machine was taunting me. For 78 days it kept my son alive and I am grateful for that, however, I was hoping to never see it again. Luckily 48 hours later it was removed, unused.

By the Sunday after his transplant, Finn seemed to be stable and he was brought down to close his chest. Everything went according to plan and he came back safely to us. He seemed to stabilize. We felt like we were on the right track, and we were. Until the following Wednesday.

To be continued... Rejection, Infection and Clots Oh My!