Skip to main content
Labels
Posted by Unknown May 19, 2017

At the End of the Hall

At the end of the hall tucked into the corner of the cardiac ICU there is a room that is dimly lit and unusually quiet tonight. Typically plagued by the talk of doctors and nurses, beeps and whooshes of machines there sleeps a little boy who silently fights a battle for his life. By the looks of his sweet face you would never know that his own heart has betrayed his body, inside his chest it refuses to do the job it's supposed to. Behind his soft smile he is in pain. He doesn't know anything else, just the pain he was born with. It hurts for him to breathe. His heart is too weak to pump blood to his fingers and toes so they remain eternally cold. This room and a few like it are almost all he's ever known as home. The smell of antiseptic and touch of nitrile gloves are unsettling but familiar.

It's easy to look at him and forget he's sick. That he is dying under his pink skin and infectious smile. Last night I woke up and stood up straight out of bed in a sweaty panic. I couldn't find my baby, where was he? I looked around, under the covers. I then turned on the light before realizing where I was. It took me a minute to put the pieces of my shattered life together and remember. I laid back down in my cold and empty bed and tried to sleep but I ached. I grieved for him, his brother and the life we had been robbed of. 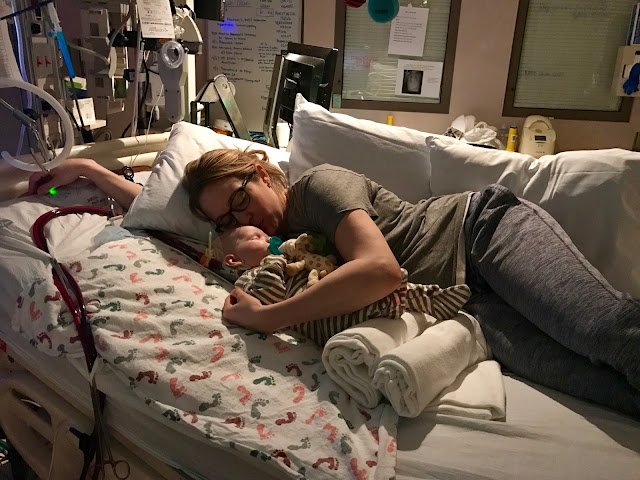 I spent the day fielding conference calls, emails, doctors visits, texts and messages from family and friends. Sutures, vaccines, stretches, feedings, medications all seemingly inconsequential decisions have become life and death. These decisions must be balanced with the rest of life that happens outside of this room. The stress is overwhelming, the darkness is monumental.

Finally, at 10:49 PM the world stopped. I hung up the phone and I held my child for the first time in 24 days. Except, I'm not actually able to hold him, so I curled up next to him and inhaled chlorhexidine washed skin. I needed to feel him on as much of my body as I could. I've forgotten what his weight feels like in my arms. If it were possible I would put him back inside of me where he is safe, where my body can do the work for him and he wouldn't have to know this cruel world or the feeling it has imposed on his fragile body. We both closed our eyes and for a moment forgot where we are.

At the end of the hall a mother's heart is breaking for her son's broken heart.