There are two super heros in this whole ordeal Finnegan, of course, and Batman. By Batman I mean Asher-man who often plays the role of Batman.

Asher is currently going through a super hero phase and I find it so timely. Right now when we all need a hero he has stepped up to the plate and served as the protector of my metaphorical heart. He has kept me safe from harm and proved to me that there is good in the world when everything seems so dark. His infectious laugh, his imagination, his strength and compassion are truly that of a super hero. Daily I remind myself that he came first for a reason. I couldn't do this without him. He is my reason to be strong, the reason I can't crumble. 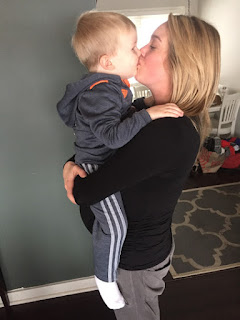 When I was pregnant my biggest worries were around how a new baby would affect my number one (at the time) guy. I read books and articles and signed us up for classes to try and combat any jealousy and resentment I assumed he would have. Tears were shed over the thought of him feeling anything less than the amount of love I have for him. That he would somehow feel slighted by this new baby invading the life where he was doted on all of the time. One night when I thought I was going into labor I sobbed thinking that it was the last night I would be tucking him in as my one-and-only. I was wrong about everything.
Asher loves his little brother so much. Every day he shows me that. Whether it's drawing a picture at school or telling me that "when Finnegan comes home he can use the little potty and I will use the big potty" it is clear that his brother is on his mind. One time in the hospital when saying goodnight to Finnegan, Asher asked me about when he was a baby in the hospital. My soul shattered. He thinks this is what happens to babies. That he too went through this. I don't know how you are supposed to explain this to a child but I do my best. I want to be honest, embrace his curiosity but also protect him from the horrors that are now part of Finn's life. Figuring out that balance is difficult. We all just want Finnegan to come home, to play with his brother, to sleep in his crib and to snuggle in his family's arms.

This morning at transplant rounds there was a lot of discussion around Finn's lungs. Historically he had issues with the left side due to compression of his massive heart. As expected his new heart quickly alleviated that problem. His lungs looked relatively good post transplant. We actually saw air around where his heart laid in his chest for the first time. How wonderful! After the bought with rejection last week they seemed to take a hit. The streaks on this x-ray weren't promising and he was showing areas of collapse. Increases ventilator support was not making the difference it should. The CT scan showed what we expected and didn't give much more insight. The bronch however retrieved some blood in his right upper lobe which didn't feel good to the doctors. It could very well be an infection but it could be something more. Shoot, it could be (and most likely is) both.

For now, we are treating the infection more aggressively. There are, as always, risks to the new antibiotics and so Finn will be continuously monitored as this antibiotic will attack the only part of the immune system that we have allowed him to keep with his rejection. Therefore he will be even more immuno-compromised. He gets labs daily so we should be able to watch for complications. I can only hope that this helps him recover. The breathing tube is our biggest struggle and we have to get it out.

This is no life for a baby. This is no life for anyone. Finn looks at me longingly, almost to say "why don't you just pick me up mommy?" His eyes are cloudy and distant because of the sedation he requires. His movements are limited as they don't want him to pull his ET tube out (he's done it before) and he is weak from being deconditioned. It takes two nurses to flip him from side-to-side every few hours. I read to him, sing to him and rub his sweet head. I shower him in kisses and take the socks off his hands so that he can stretch is long fingers out. I hurt so badly because this is not what he should endure. I had such wonderful plans for this child. A full life of love and happiness. He needs to get better. We got him his heart, that was supposed to help. How is it that we feel further behind than when we started? I know we aren't but in some ways it appears that way. 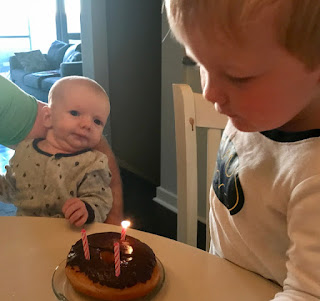 I miss Asher. I miss Jeff. Tomorrow marks four months since we were all together at home. I remember it but I am scared that the memory will fade. It was Asher's 1/2 birthday and we celebrated with donuts. He wore his Batman PJs and blew out his 2.5 candles. Skinny little Finny looked at him so lovingly. I had no idea that this moment would be the last one before we traveled down the awful road we find ourselves on. Had I known I would've never let it go. It feels like such a silly picture but it represents so much to me.

I truly believe in my soul that Super Finnegan can rise above and make it through all of the problems he's faced. That these tears of sadness will be replaced with tears of joy. That we will have more 1/2 birthdays to celebrate at our little kitchen table. That my Batman and Superman will save me from this terrible despair. Finnegan will rise, he will conquer and he will fight. He has such purpose and has touched so many lives. This is merely another giant bump in the road to happiness.