There is no crystal ball to tell us how long Finnegan will wait for his gift and there is no way of knowing that a new heart will save his life or how long that life will be. There is however a median wait time. In region 7 the average wait time for a heart is 121 days for Finn's age group. We are halfway there. I've always considered myself an overachiever, hopefully my son will follow those footsteps, at least in this case, and be early.

Finnegan remains intubated and on quite a bit of sedation as the doctors don't foresee his left lung coming back until he gets a new heart. However, the past few days he proved to them that is he is tough little fighter and won't go down easily. When I arrived in the morning before rounds Friday he had some oozing from his cannula site and some bloody secretions coming from his ET tube. The team went down on his anticoagulant and ordered an x-ray to see what was going on. To all of our surprise, a glimpse of air in his left lung was present on the film. I cried! Jaimie, our NP hugged me and said "that's air!" I know that he likely won't be able to get the ET tube out before his big surgery, but I will hold onto the hope if he lets me.

During rounds Dr. Said called for a CT scan to get a good look at what is going on. Between the lung and his cannulas at almost 70 days we needed to be sure that we are doing everything we can to keep him safe. The CT scan looked at his compression, lung function and then his arteries. The whole time he was gone I had irrational fears consuming my mind. What if he has a tumor or something that would change his status for taking a heart? I prepared myself for the worst during the 45 minutes that he was out of my sight. 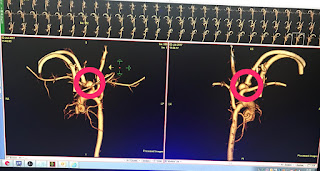 When Dr. Said came back to review the results I held my breath. He acknowledge the lung compression that we were already aware of. Then he used the words pseudo aneurysm when describing his vessels. Basically the carotid has some bubbles on it from the trauma of repositioning several times. This is extremely dangerous and could be "catastrophic" if one were to rupture. The only way to avoid that is to bring Finn down the OR and open his chest. They will recannulate him directly in his heart and do their best to repair the artery.

For the remainder of the day I didn't leave Finn's side. We read, we snuggled and we talked about what the next few days are going to entail. I couldn't stop rubbing and kissing his sweet virgin chest. Of course I am aware that he would eventually be opened up to replace his defective heart, but I truly believed that the next time he went to the OR it would be to receive his gift. As with all things medical there are risks and benefits. We discussed them at length but ultimately there isn't much of an option. Today, early afternoon, my innocent son will receive a sternotomy, be put on bypass, have his arteries repaired and then put back on ECMO directly through his heart. It's likely that he will come back to his room with his chest open while they wait for draining and swelling to reduce. Without a question he will require a blood transfusion.

Jeff is staying back in the cities to keep Asher's life "normal" while Finn is going through his procedure. We decided together that this is the best approach for all of us. Although being alone while Finn experiencing this surgery is difficult, it would be harder to manage a rambunctious toddler and my complex emotions simultaneously. Tomorrow they will come down and we will let Finn recover while we roam around Rochester and partake in Fourth of July activities. 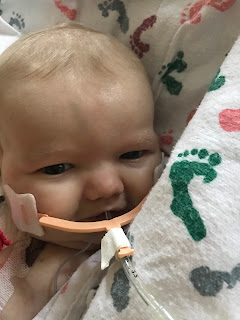 It's as if Finn is comforting me this morning. I stayed with him until 1 AM. When I knew he was sleeping soundly I quietly snuck out and returned first thing this morning. Walking into his room after a restless night I was greeted with the most infectious smile. Throughout everything, all of this, he is still happy. This sweet boy has no idea what his day will hold yet he looks at me with joy in his eyes as if to tell me that everything will be alright. It's likely I won't see this smile again for days so I will cherish every moment of it. I told him stories of what the Fourth of July is supposed to be like. How we typically go to Turtle Lake and play on the beach. Boatrides, grilling, friends and family. I reminded him to be strong so that next year he can experience all the wonderful things this world has to offer him on the other side of this adventure.

We called for music therapy and we sang "Mr. Sun" together as he drifted contently off to dreamland. I'm still hopeful, although fleetingly so, that he will get his gift soon. That we will start healing physically, emotionally and mentally. Until we get that call we will continue to keep this child as safe as we can. Right now that means increasing the interventions by opening his chest. 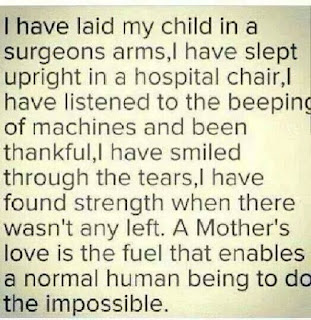