What did I do to deserve this? Was what I did SO awful that my son should have to endure this kind of pain? I've tried all my life to be a good person. I donate money to numerous causes, I reuse, recycle, reduce, I've done Feed My Starving Children, Meals on Wheels, Salvation Army bell ringing and more. There have been many times that I have bought the homeless man walking 1st Avenue dinner and I hold the door open for strangers whenever the opportunity arises. I genuinely care for people and think I am a pretty good friend. I don't fat shame or make fun of people. I've never bullied anyone or stolen money. I thought I lived a pretty good life. I think of myself as someone who "does the right thing" whenever I can. Is all of this because I silently judged the mom that feeds her child McDonald's? I can think of a time in elementary school on the bus when all the kids were picking on this one poor girl with an unfortunate hairstyle. They were crumpling up paper and garbage and trying to stick it in her hair. I didn't join in, I never would have, but if I would have stood up for her and told the other kids to stop, would that have changed things? Maybe if I was a better person my son wouldn't be dying. 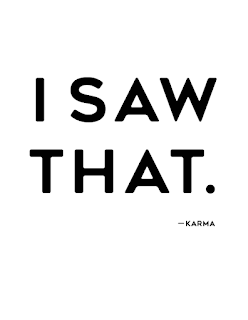 It may seem frivolous now, but I keep trying to get back in karma's good graces. Maybe if I just do enough good I will be repaid with my son's life. As if buying the person behind me coffee in the drive thru at Caribou or donating more money to charity will somehow bring my son his gift. Maybe if I mute that voice that says "I can't believe she let her son eat Cheeto's for dinner" and prove that I am not judgmental, he will live. I wish I could take back every questionable moment in my life. Did I drink too much in my twenties? Was I too mean to my mother in my teens? What if I wouldn't have bought new shoes and given that money to someone who needed it? Perhaps this happened because when my cousin had cancer I wasn't supportive enough or when my friend's baby died I didn't reach out to comfort her in the most painful moment of her life. I did this to myself, by not living a virtuous enough life.

Finn has a new baseline, and honestly it's depressing. He will remain intubated until after his transplant. His left lung has pretty much given up under the pressure of his tremendous heart. His airways are floppy and even on the ventilator with high pressure they can't get it to re-inflate. The team will do serial bronchoscopies until he gets his gift in effort to try and clear secretions. But, of course the bronchs have risks like bleeding. So, we have to balance his need for clearing mucus from his lungs with his need to not bleed internally. Just like every other day, it's a delicate balance. But now we have added a lung in the equation.

With the changes in what "okay" is for sweet Finnegan it's getting harder to wait. His need for a new heart is greater than it was a month ago and I worry that this is our trajectory. In the medical community they always talk about trends and right now we are trending in the wrong direction. I don't want to mention any of the positives or talk about the organs that remain in tact for fear of jinxing them. Because we don't have anything to hang our hat on other than hope, I have to take jinxes and karma more seriously than ever. Things I never truly put much stock in before. So no more bragging about our wins or small victories for a while. I will stick to reporting the news and do my best to hold onto hope that we will soon be talking about bigger milestones. 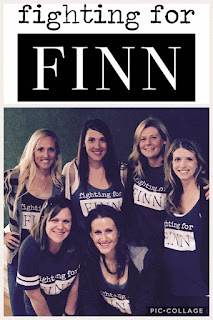 Speaking of karma, there are a whole bunch of people out there who have been earning their extra credit points. 510 people have bought Fighting for Finn shirts as of today and are sporting them all over the world. So many friends have bought or made meals for us and delivered them to our home during the week when Jeff or I are single parenting Asher. We've received gas and coffee giftcards, toys, blankets, greeting cards, snacks and books to name a few. My heart is warmed when I get a little orange slip in our RMH mailbox telling me a package filled with day brighteners has arrived. Last weekend and the weeks leading up our friends rallied together to come up with the most amazing benefit and silent auction to raise money for Finn's fight. The prizes that were donated were outstanding. Who knew our friends had such connections? People came from all over to support us and raised an incredible amount of money for our son. I don't know that words will ever express the gratitude we have for the friendships we've achieved over the years.

On Tuesday I spoke to our transplant coordinator, Kevin, and he told me that Finn is showing up for organs. He actually even received an offer within the last week. As in, he was #1 for a heart. I couldn't believe it! The team had turned down this particular heart for two reasons. The first being that it was too large. The second was that the mother had a questionable drug history. However, had it been the right size they would have taken it. Yes, a heart from a drug addicted mother's child and it being likely that she did drugs while pregnant and growing that sweet child would be better than the heart that I gave my son. The risk of a heart that had been exposed to methamphetamines is a risk we are willing to take. That heart that potentially was at one point exposed to dangerous street drugs is safer than the heart that this whole foods eating, exercise getting, no wine or sushi eating mom could provide her baby with. It's a tough pill to swallow. Where is karma now?

Today is day 59 on the wait list, 64 on ECMO. I am anxious to find out what our lucky number will be. In the meantime I am trying to stock up all the good karma I can.