Happiest Baby on the Block

I got into Rochester last night and was greeted by the happiest sick baby you have ever seen. Finn was smiling and gabbing away. He was almost as excited to see me as I was him. They've been weaning his sedation more and more and with each day comes more of his personality. I've always said that Asher was the most smiley baby ever, however in Finn's condition he is pretty happy. I wonder if he would be just as giddy if not more if he didn't have his broken heart? I cannot wait to find out!

Shortly after I got back Dr. Crow was handing off the night shift to Dr. Arteaga. They stopped by to check on Finn (and me). They went on and on about how well behaved he is, how great he is doing on ECMO is and how he is just the cutest and most content baby. After boosting Finn's ego for a few minutes they turned their attention to my sweet and strong husband. They went out of their way to tell me how involved he is in Finn's care. How he asks a lot of questions, stands up for Finn's best interest and is clearly devoted to his son. The doctors told me that each time they came by he was either reading to or holding Finn. That they stare adoringly at one another and their bond is so evident. Our nurses concurred. Jeff takes such an active role in our sons' lives. He truly is an amazing dad. He is Asher's best friend and Finn's advocate. Not to mention, my rock. He is strong when I am weak. Jeff holds me up when my legs give out. He lets me be crazy and depressed but brings light and love to lift me up. 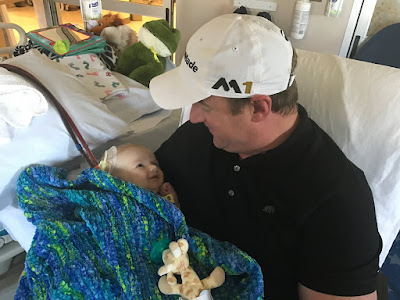 Some other changes that occurred while I was gone this week were positive as well. Finn's heart function continues to improve. So much so that they have been letting him do more of the work. Last Friday May 26th, they did a turn down of the circuit to see how he handled it. Dr. Nemergut was impressed. They said his EF had improved from a 15 when we came to Mayo, to 31 (normal is above 60 all the way to 80). Finn, previous to hospitalization, was always in the 30-40 range. I can't tell what they are going to do with this information, if anything. I've been given a little bit of conflicting thoughts regarding whether he will ever come off ECMO. When we were first admitted to Mayo we were told that he would stay on ECMO until he got a heart. Since then he has continued to be a star and do extremely well. If he doesn't need the support, some intensivists don't want him on it. The problem is, there are risks, bad ones, of being on it. But, there are also risks of coming off. One of the biggest is having to go back on... So, for now, Finn has proven that he doesn't need the level of flows and oxygen that they are giving him and they are turning it down. Of course, that comes with risks too. The first being that the slower the flows the more likely the machine is to clot. You can't do anything around here without affecting something else.

Besides the ECMO flow change Finn has also decreased his sedatives. He has weaned his Presidex significantly and they hope to have him off in the next 24 hours. The goal is to get him off all sedation by the time he has his transplant. Right now he is on the Dex, Ativan and Chlonidine. Once we are off the Dex (today hopefully) we will start weaning the Ativan more and then the Chlonodine last. So far his withdrawal symptoms are pretty mild. However, the last few weans are the hardest I'm told. He will remain on blood thinners for the circuit, supplements and diuretics until transplant. The reason they want him off sedation for the transplant is because they will have to add them all back on and they don't want him to have a tolerance. I am proud of our little warrior, he is handling these changes all so well.

Today my heart is hopeful and happy. I see my smiling and joyful boy and know that he is a fighter. I received another package at the RMH with books for Finn, crystals signifying strength and love, snacks, tissues, a notebook and more. It brightens my day and warms my heart to see the support pouring in from friends near and far. Thank you Tonja and Nicole! 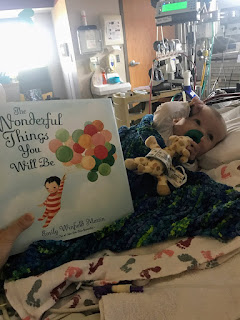 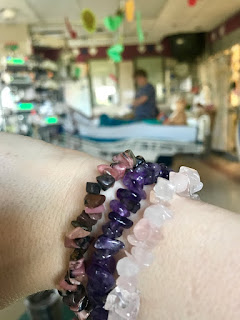 The wait is long and there will be good days and bad throughout this journey. I feel the love from Finn's army and am so grateful for the people I have met along the path my own life has taken because without them I wouldn't be who I am and have the strength to be what my son needs. Thank you to all of you who have made me, me.