Skip to main content
Labels
Posted by Unknown May 13, 2017

I can hardly believe that 4 months ago, today, my world flipped upside down. This child, this beautiful baby boy has completely knocked me off my feet in every way possible. 120 days ago my life forever changed and not in that "you just had a baby, of course your world changed" way. In a real, significant forever kind of way. Happy birthday sweet boy. It's been a wild four months but I wouldn't trade you for the world. I love you so much! 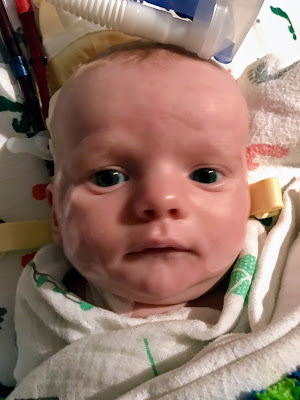 Right when I think I am starting to get the hang of this emotional roller coaster it hits me again. Something knocks the wind out of me. Since we moved to Rochester I have felt far more composed, strong and confident. We were at Mayo. We checked the boxes - move to Mayo, get on the list. Check and check. Now we wait.

The wait is turning out to be harder than I thought. There is a reason people say it's the hardest part, and although I don't think it's the hardest, it is pretty tough. We've ended our second week down here and it has been far more eventful than the first. Week one we just sort of sat, coasting. Nothing much to change. This week however there were more ups and downs. That familiar unknown feeling came back. The tears, fears and sadness returned.

Jeff started out this week in Rochester. Monday through Wednesday he sat by Finn's side and dutifully updated me on what was happening. Finn was much more awake and they spent a lot of time reading stories. I loved getting these pictures. He is such a wonderful daddy and you could see how happy Finn was to have some father-son time. 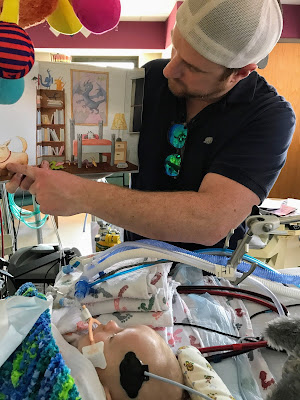 On Wednesday when I returned I started to feel that familiar sadness that I know so well. I was hyper sensitive. "Is he making eye contact?" or "Is he sleeping too much, not enough?" My emotions were getting the best of me. Late that night there were two clear emergency situations going on around us. Alarms, beeps, people in scrubs hurrying around the unit. All after the typical 7-7 shift. It was obvious that something was happening and it wasn't planned for. My PTSD kicked in. I saw a couple hold each other's hands, faces red from tears. I heard people talking in a direct and urgent fashion, decision making, challenging. I saw an ECMO machine get wheeled up and watched it sit outside of one of the two rooms. Curtains were shut, machines made noises and there were a lot of people involved. The nurses came in and started putting together an emergency plan for Finn. Because of what was happening on either side of us staff was limited and if anything changed with Finn they had to be prepared. I was anxious, I still am. I know what that feels like and I hurt for those mommies and daddies. I feel that pain, every single day.  I wanted to hug the parents but I was paralyzed by my own anxiety. All the feelings of being on that side of things came back. My chest felt tight, the same way it felt the night he went on ECMO. My body felt like it wasn't my own. My paranoia was high and my body couldn't keep up with my brain. I stayed late that night holding my son's hand. I couldn't leave his side.

Thursday turned out to be a little more exciting in a positive way. We had planned all along to extubate and I was looking forward to it. Of course with any change there are concerns. I don't want him to continue to be intubated and extubated over again so I wanted to be sure they were ready. They did bronchoscopy to be sure. That's when they take a little camera and put it down his ET tube to see inside his lungs. Our doctors wanted to inspect his lungs to see the secretions before they took his tube out. In the end they just sort of said "screw it" and extubated him, but not after spending a lot of time down there. Dr. Aganga told me that Finn's left mainstem bronchus is compressed. Basically that his heart is so large that it's flattened his main airway to his left lung. Poor baby, that heart is causing him so much pain. 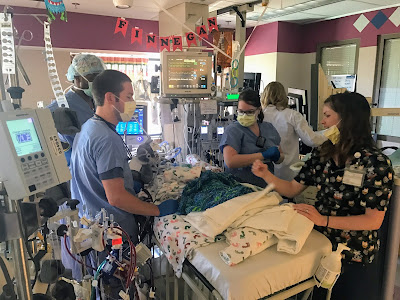 Then came Friday. The day I had been dreading. I knew it was around the corner as there was more and more commotion in our room and a lot of attention to our ECMO circuit being paid the last few days. The circuit was still a hybrid from Children's roller version with smaller tubing and Mayo's centriphical machine with shorter but thicker tubing, It was going to be quite the production. A lot of planning, even more people and quite a few emergency drugs would get us through to a new set up. The tubing was starting to get some visible clots in it and the oxygenator (the lung) wasn't working as well. Our team wanted it changed before the weekend and before it became an emergency. They gathered around the room, a new machine, tubing, the drugs, the scrubs. There were more people standing by outside the room. I kissed his sweet face, told him to be strong and held his little hand until they ushered me out. 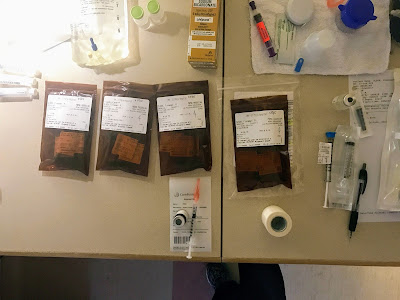 He was off ECMO for two minutes and seven seconds. His blood pressure dropped a bit but he handled it really well. On Tuesday they had done a turn down of the circuit as a sort of test, to see if he could handle being off the support and he handled it flawlessly, but this was the real thing. Although the time off the machine was just over two minutes, they were in the room with the curtain closed for what felt like forever. I watched feet from under the curtain. I listened for yelling, alarms and beeps to try and guess how things were going. I couldn't tell. All I knew as that no one appeared to be in a rush or concerned from the looks of their feet. 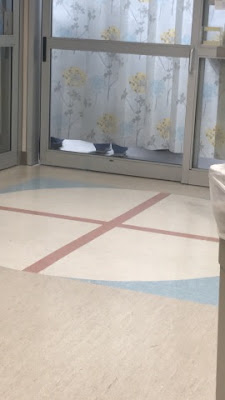 While I waited a woman walked past me. I have seen her almost every day since we've been here and I noticed her because she is on ECMO and walks the halls two to three hours a day. The nurse walking with her was one that we had previously so she introduced us, her name is Erin. I broke down in tears and told her that my son was getting a replacement circuit at that very moment and I was so scared. She offered me a hug and told me about how absolutely wonderful she feels every time she gets a new machine. Erin has been on ECMO at Mayo for 79 days waiting for her heart. She is an inspiration. I look forward to seeing her again soon and I hope she gets her heart. I needed that hug yesterday.

Shortly after my encounter with Erin, Finn's "neighbors" were discharged. There was this sweet little baby that was in the room since we were admitted and I often saw her parents coming and going. They also had a toddler, just a little older than Asher. We would see them at The Ronald McDonald House and we would exchange pleasantries but never really met. I had made a personal goal to get to know the mom. My heart and NICU mommies at Children's were my lifeline. They had become so important to me and I was missing that connection. It's funny how as an adult I feel that apprehension and anxiety to make a new friend. My mama friend from MPLS told me to do exactly what she did for me, come by with a basket of chocolate and just talk. I never got the chance. They walked by on their way out while I waited for Finn to be done. We hugged. I cried more. "Congratulations" I said, as if she had won a prize. What do you say? I've watched people be discharged before, it's always so emotional. The excitement, nerves, jealousy. I am so happy for Megan (now my friend on FB) and her family. I can't wait to follow her through our new virtual friendship and hopefully get our heart babies together someday. Even though we barely met, we have a strong bond. One that I have that with so many of these heart moms, many who I have never met face-to-face. 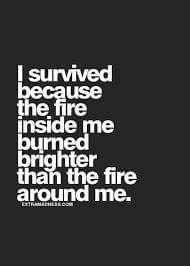 The surgeon came out to tell me that Finn was stable and everything went fine. Release. I let out a loud sob and it just didn't stop. I must have been holding it in because it wouldn't stop. He was okay and they successfully got him on a new circuit. He sustained the change well and they didn't have any difficulties. As expected, he was groggy from the sedation but he was fine. This is now our third ECMO circuit. Hopefully our last. Perhaps this can be the one that bridges us to his new heart. They don't last forever and if the wait is long he will be transitioning again, but for now I hope it's the last one.

I hope the third time is the charm and Finn can sit comfortably on this circuit until we get our life changing phone call, but I am realistic. This may be a very long wait. Some days I am okay, strong and handling it, others I am broken, angry and sad. Most days I go back and forth by the hour. Our doctors assure us that Finn's heart function is actually better than when we were admitted and that he is doing well, stable. That has to be good enough for now.