Skip to main content
Labels
Posted by Unknown May 03, 2017

Is it possible to cry all the tears? I asked Jeff today if he thought it was weird that I haven't been crying. When we were up at Children's I spent most of the day weeping or fighting back the tears. There weren't enough tissues to dry my eyes. For some reason that sadness, that deep dark depression has been replaced with a debilitating anxiety. The anxiety that makes you sick to your stomach, your hands sweaty and cold at the same time. My whole body feels shaky and ill. But where did the sadness go? Do you just get used to something like this?

Maybe it's because my son is no longer acting or looking like himself. He is sedated and resting most of the time. Maybe it's because I can't hear him cry or see him smile. I don't know. Last night I went through my phone looking at pictures and videos. I couldn't remember what he sounded like. I couldn't picture his smile in my head anymore. Being so consumed with all of the medical milestones and filling our Mayo team in on when he ate last through a tube, I couldn't remember the exact date he actually ATE last, nursed. It was March 30th, three days after we were readmitted to Children's. Over a month ago. 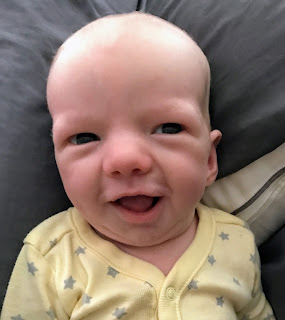 It has been more than a week since I held my sweet boy in my arms and rocked him to sleep. Had I known it was the last time I would have held him and I never would have put him down. I wouldn't have gone to work that day. It wouldn't have changed his outcome, but I would have been able to be there for him when everything started to go south.

Our nurse keeps thanking me for calming my child. When he gets worked up from suctioning or when they move him and his heart rate shoots up I am able to bring him back down. My voice and my touch help soothe him back into his perfect numbers. It reminds me of when our nurse Jaime at Children's would be so encouraging to me because his numbers would level out when he was on my chest. Babies need their mamas but mamas need their babies too. I am relieved that we don't have to sedate him so deeply when he wakes up. He has been asking for oral milk cares like a little baby bird. He looks at me longingly and sticks out his tongue until I drop the breast milk into his mouth. He loves it and it makes me feel a little lighter for a moment.

They were right. Everyone says waiting is the hardest part. It's so true. We aren't really doing a lot, which is great because he is stable, but we also aren't working toward anything. Just waiting. It's hard to wait until you can see your son smile or even cry again. Waiting to hold him, feed him, bathe him and dress him. We will do those things again and they will be so significant, but right now I am mad at myself for not remembering. I wish I would have inhaled every intoxicating moment just a little bit harder and longer. I wish I could remember what that happiness felt like. Right now it is so clouded with darkness, fear and anxiety.